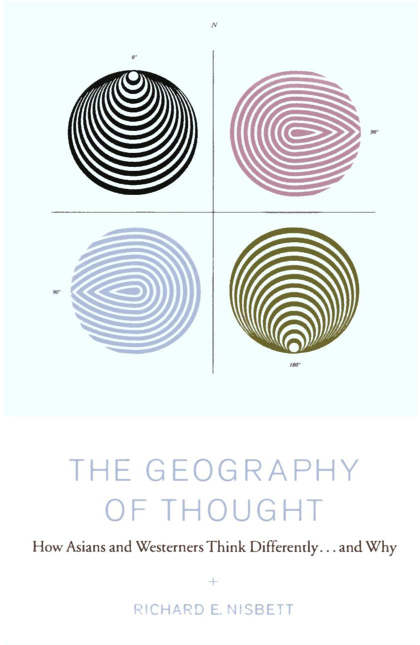 I was at a symposium a couple of months ago and during one of the sessions, The Geography of Thought was referenced. The presenter was quite emphatic about it being a key text for anyone involved in international education and, having finished reading it recently, I would have to say I completely agree. This particular post is a bit of a book review, to be sure, but also a recommendation for anyone who works in education. It is not a book that can be claimed alone by international schools: national schools also have a great deal to learn from what Nisbett has to say about how people think and perceive the world around them. The West’s perspective is described as Aristotelian and the East’s is described as Confucian, a reference to the philosophers who have had the most impact on those broad geographical regions of the world.

The value of The Geography of Thought is in the fact that it makes very clear how completely diametric the worldviews of the East and West are. Nisbett’s starting point is explained on the very first page where he states:

A few years back, a brilliant student from China began to work with me on questions of social psychology and reasoning. One day early in our acquaintance, he said, “You know, the difference between you and me is that I think the world is a circle, and you think its a line”. Unfazed by what must have been a startled expression on my face, he expounded on that theme. “The Chinese believe in constant change, but with things always moving back to some prior state. They pay attention to a wider range of events; they search for relationships between things; and they think you can’t understand the part without understanding the whole. Westerners live in a simpler, more deterministic world; they focus on salient objects or people instead of the larger picture; and they think they can control events because they know the rules that govern the behavior of objects”

The differences between the two perspectives is central to Nisbett’s discussion. In Chapter 1, the philosophy, science and societies of Ancient Greece and China are covered, providing a historical foundation for Nisbett’s argument. The following chapter focuses on the implications of these foundations to Western and Eastern world perspectives. Chapter 3 contends with the notion of “the self” and how West and East construct the individual and community. Starting with six generalisations that are considered to be the Western conceptualisation of “the self”, Nisbett explores how the Eastern view differs. The notion of one’s social existence and what that means for how people literally see the world is covered in the following chapter. How the idea of cause and effect, language and logic have impacted Western and Eastern perspectives and interpretations form the basis of chapters 5, 6 and 7 respectively. Chapter 8 answers the “so what?” question: how and why do the number of differences between Westerners and Easterners found in almost every study undertaken by Nisbett actually matter?

Aspiring to a more “situational” perspective gives Nisbett a starting point to conclude with his hopes for both the socio-intellectual frameworks that he has spent the better part of 230 pages describing. Nisbett hopes that the best of both cultures will prevail as each moves towards the other and, in the process, have a transformative relationship. Western and Eastern social and cognitive aspects can contribute to a blended mode of thinking that will have a positive impact on the world at large.

This is why this text is so important to education, national or international. As the world becomes increasingly interlinked, it is crucial that teachers can show students how to navigate the newer, ‘smaller’ environment and to do so responsibly, ethically and positively. This text is an excellent starting point for teachers to build up their capacity to grow intercultural competencies within their students and to have an impact on the world beyond their school’s front gates.